On Sunday I ran the Disney Princess Half Marathon! I’m catching up on posts due to my Disney Vacation! Look forward to a few more

Read more about my race preparations and race expo visit and my current marathon training goals!

Sunday morning was the big day!  If you’re new to reading, I travelled to Orlando to run the Disney Princess Half Marathon with 7 other awesome ladies, most from the Chicago area.  Thanks Jenna for introducing me to everyone!  We signed up back in August to run this race and have some fun on a destination race trip.

I had a stressful week last week, and as soon as I got off the plane in Florida, the warmth melted my stresses away.  I spent a night hanging out with my Aunt Fitzi & Uncle Paul and their bulldog Wilson. He looks so sad, but seemed to be happy!  He loved to follow people around.

Saturday morning headed out to meet my co-princesses! After the Expo, Jenna & I hung out by the pool for a bit before we got ready to go out to dinner @ Downtown Disney.

The race started at 5:45 AM (my earliest yet) and we had to be on a shuttle from our hotel by 4 AM.  After getting dressed and some primping, I put on my bad-ass hoodie and headed out into the florida air to board the bus.  Apparently hundreds of other people had the same idea – and we all waited in line together.  It was dark, but see all the people waiting in line?

Jen & I took a photo while waiting 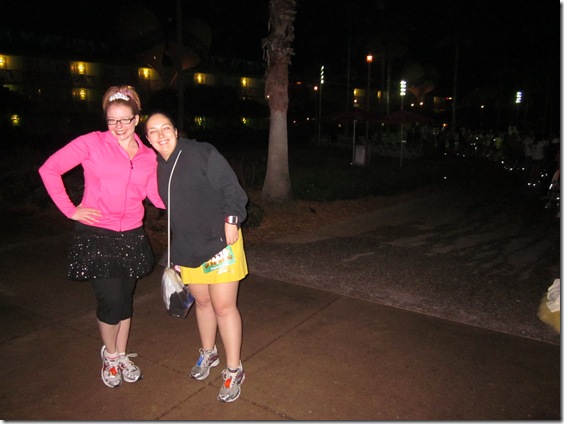 Finally, we boarded a bus & made it to the race start! There was the required stop at the port-a-potties

and then a looong walk out to the race start.  We all had different start corrals, and magically merged into Corral C (I had placed into corral B).  We met up with the rest of our princesses:

I got to start the race with our Birthday Princess, Heather!  It was her birthday on race day 🙂   Heather & I run at similar paces, so we started together. However, I had some minor stomach issues (nerves, not my standard dinner or breakfast), and I told her to feel free to go on whenever she felt she needed to.  We started and ran the first half mile together: 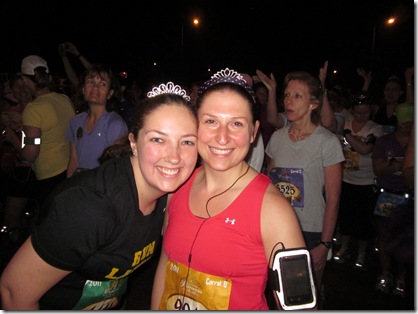 There were fireworks at the start, and it was super dark out.  I took some photos during the beginning of the race, but they didn’t turn out well because it was so dark and I was also running.

As the sun rose, I took some more photos along the race course. 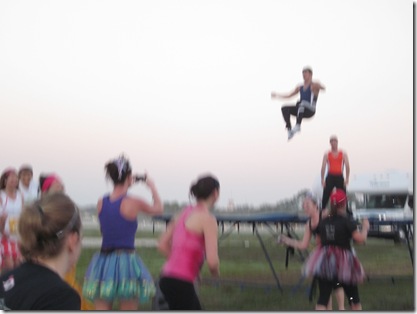 Around mile 3.5 I began to need to use a bathroom.  I repeatedly saw some great examples of female comaraderie during this race: runners popping off two-by-two or in small groups to go to the bathroom in the woods.  I never saw a lonely runner walk off into the woods.

My bathroom break was about as ideal as it could have been:  passed a set of port-a-potties that had a long line. I swore I’d run to the next set and go there. Just around the corner, there was a lone port-a-potty. Only one person was in front of it, and she was waiting for her sister, who then promptly exited the stall.  I went in and did my business, and only lost a minute in all of this!

Then we entered the Magic Kingdom:

I stopped for one photo opp (almost no line), and then got back on course.  The rest of the race was pretty fine – I felt comfortable running although I knew I didn’t want to push myself for a PR given my nerves & being out-of-whack with food & lack of rest. It was an entertaining course, and I felt great — until mile 12.

At mile 12 (and a little earlier) the course began to go onto highway on-ramps, which had pretty steep grades and “hills”.  My quads screamed out! At 12 I also began to feel a funny pain in my right foot.  Not sure what it was, but I tried to run through it, and forgot about it for the final stretch! Ran it hard as I could into the finish, where we ran through parts of Epcot.

After the race, I forgot to stop my Garmin.  I passed through medical to get some of the biofreeze they were hawking along the entire course, and slathered it all over my legs.  I also got my medal, some photos & food, and met up with the other princesses who had finished.  Our birthday princess, Heather, had gotten a major P.R.! She ran 2:14, which was 15 minutes faster than her first half marathon in October!

We chilled out and waited for more princesses to file in. Check out this photo that Jenna took:

When we all finished, we congratulated each other, and then took photos!

We then headed for some grub…. Downtown Disney here we come!  We made it there and headed to Planet Hollywood just in time for it to open.  Check out my fashion statement:

Don’t you love the compression socks with my yellow skirt & sandals!  We fueled up on my new favorite meal from Iowa – buffalo wings & brocolli

Then it was time to head back and recover a little bit before the next challenge… Disney Parks Post Race!  Stay tuned!

I’m in Orlando this week for a work conference and have been incredibly privileges to be able to run each AM. I’m staying at a posh golf resort, and have been jogging around the lake, the golf course and all over the property.

It’s been great to be able to get out, get fresh air and stretch my legs each morning. I love being able to get my runs in, in warm weather, as the sun comes up. And then eat lots of fresh fruit, yogurt, and muffins afterward.

Orlando, watch out! I’ll be back in a few months for the Disney Princess Half and look forward to knocking that out of the water!