Funny signs I remember from the Chicago Marathon:

And in San Francisco:

Sunday morning I was snoozy-awake before my alarm as my nose was on alert for the smell of coffee, my new pre-run ritual.  I actually smelled coffee an hour before my coffee maker was set to start brewing!  Around 5:15 AM though, I headed downstairs to drink my coffee & start my morning prep.  Which really started with a big gulp of hot coffee and me burning my tongue! Can we blame anything that goes wrong on my burnt tongue?!

Anyway, I continued on with getting ready, including warm-up clothes:

My friend Dave & I cabbed it downtown and met up with another Dave (Hawk) at the Congress Plaza Hotel Bar.  No we did not drink before the race, we just wanted a spot to be warm before heading out to to the race!  We were there for maybe half an hour, and then headed out toward gear checks, port-a-potties & corrals.  I’m a bit superstitious and don’t feel ready to get into a race corral until I’ve visited port-a-potties twice, so that had to be done.

I was a bit  worried as the corrals had started moving when I actually got out of the port-a-potty, and made a beeline for the 4:40 pace group I’d planned on running with. I tucked in behind the pace group, spied Bobbi & her sister, and then we started the race!

The first two miles were good, but I began to realize I needed to use the bathroom (#1 this time! Not #2!).  I kept running, but the urge did not go away. Just as I was thinking through where the next aid station was, I realized that the pacer I was behind had her name “Kay” written all over her pace signs… and that this was a friend from Madison!

But alas! I had my port-a-potty break I was jonesing for, and didn’t want to be rude with a “hi & bye” type of a greeting.  I figured I’d go to the bathroom, and then take a few miles to catch up to the pace group, similar to what I’d done at the Madison Mini Marathon.

I timed the stop, and I was out for almost 7 minutes.  It was a quick, but much needed relief at the bathroom stop. And then I was on my way.

I spent miles 4-9 working toward catching up. These miles are chock full of spectators as I ran through Lincoln Park, Boystown, and Lakeview.  I saw Mike at mile 9.5 and felt like I’d been speeding by. But off I was!

Miles 10 through 13 were pretty familiar territory, although I started to get hungry at mile 13 and took my 2nd gel a little earlier than planned.  Whether that was good or not, I don’t know. I started to get a bit nauseous, even though I’d only been drinking water.

I saw my in-laws cheering around mile 16 and was so happy to see them!  I was a little worried I hadn’t seen them at all earlier even though I knew they were out there (but I couldn’t remember where I’d see them –oops!), but I had been cruising along and see a sign come up that says “Go Lauren” – I look a little closer and I see it says “Go Lauren Wong!”  Then I saw them!  It was good to get a quick hug, and then I was on my way!

By this point it was warming up, and I realized my arm warmers weren’t evaporating sweat much anymore.  I’d been pulling them up & down for the past 6 miles, but at this point I took them off. I considered holding them for a while, but I didn’t think I’d see Mike or the in-laws again soon since I’d just seen both in the past few miles.

Mile 17 is when I started to break down. I was SO CLOSE to my pace group. According to my calculations, they were only a minute in front of me, but I couldn’t see them.  And I was starting to slow down.  I realized I couldn’t get to the pace group.

That was a hard and disappointing realization.  I was sad – because I knew I could do a 4:40, because I wanted to see Kay, and because I realized my execution fail on going faster for miles 3-16.

It was hard for me after that. I kept slowing , began feeling my legs tighten up, and started taking some walking breaks.  I was not happy, and at times wanted to drop out since I wasn’t going to make that “A” goal. My stomach was also a bit nauseous, although I kept drinking water.

I was pissy through Pilsen & Chinatown, and rallied as I approached my friend Lilian at her cheering station at 22.  I realized at that point I just wanted to finish, however possible.  I got some chips (ya salt) & swedish fish, and kept running.  I walked again for a little, and rallied when I saw more Swedish fish (!) where I asked a stranger if I could have some.

I also stopped for a dixie cup of beer at the Hash group (Mile 23) and then saw Mike after that.  He yelled to me – “bring it home” and I realized I had a 5K to go.  I can do a 5K in my sleep – most of my runs this summer were longer than a 5K.

I finished strong running up Roosevelt & Columbus drives, although I was a hot mess of disappointment when I finished.  I did finish 15 minutes faster than I’ve completed a marathon, and I am proud of that, but I expected more of myself.

It took me a little while to rally and actually meet back up with my people.  The beer they were giving out before the gear check pickup was actually good.  Yay 312! After re-clothing myself in layers appropriate for the 50 degree weather, I then found Dave & Mike, and met up with the rest of my cheer committee (Yay Wongs!).  We chatted a bit and then all headed out to leave the race craziness.

So I registered for Chicago. Just like the other 30,000 people this week. 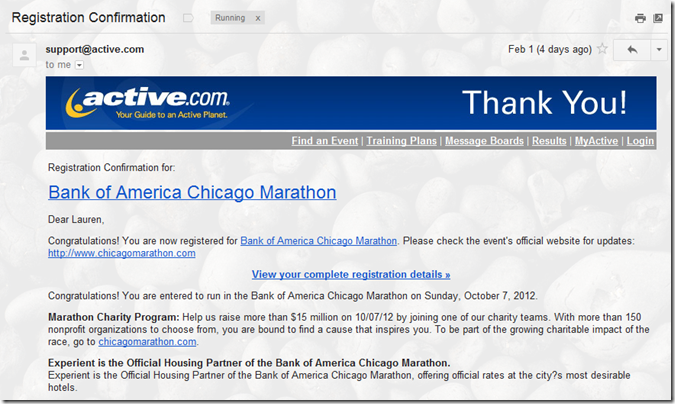 I’m excited about it, and have some major goals:

I said in my 2012 Goals that I wanted to wait before committing to the marathon again until I get faster.  While I haven’t given myself much opportunity to prove myself on this quite yet, I am confident that I’m working to get myself faster.

I want to commit myself to selecting a good training program and commiting myself to following it through.  In both of my marathon training periods in 2011 (for the Illinois Marathon and also Fox Valley Marathon) I didn’t actually follow my marathon training to a T.  I’m not sure if I need to be a part of a group training program or be coached, but those are both things that I’m considering for Chicago.  I want to do well by me and meet my goals.  Even when things get tough in training, I want to accomplish what I set out to do.

I’ve been back from vacation (i.e. the Amsterdam Marathon) for almost 3 weeks now, and I feel like I’m still getting the hang of things.  Here’s a random sampling of things that have been going on.

CONGRATULATIONS to everyone who ran a race this past weekend!  I love hearing about your experiences, whether it’s a 5K or 42K Marathon!

Well marathon was completed yesterday! 5:11:35. Not too bad. Could have been better with more logistical preparations. More to come (and real photos!) when I get back. But this was a great experience and I’m happy to say I’m an international marathoner! 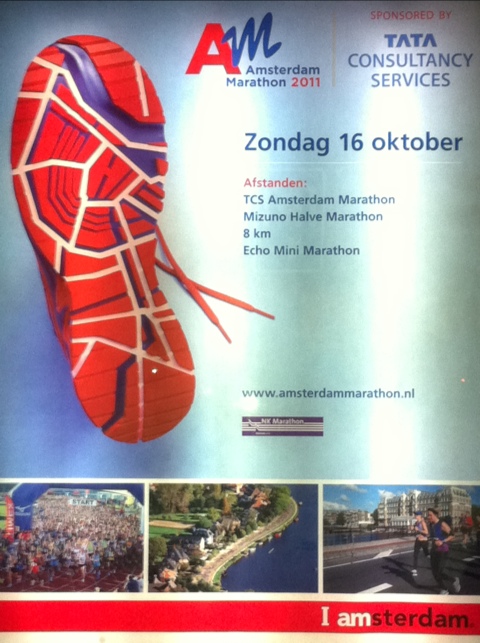