Well, maybe I can get an award for latest race recap ever? Thanksgiving to New Years was a pretty busy month, and I definitely think that blogging took a little bit of a back seat to enjoying life, working out, and getting worky-work done.

Mike & I met my family out in San Francisco for Thanksgiving this year.  Even though I’m from the east coast, my middle sister moved out to the Bay Area in late summer and we were excited to go visit!  So a family vacation was planned!

We had a lot of fun staying in San Francisco and poking around the Fisherman’s Wharf area.  I hadn’t spent too much time there in past visits, but it’s got a certain charm to it!  Relaxing at a tourist pace, in comparison to the busy-busy of the Union Square area that I’ve typically stayed in.

But what Thanksgiving is complete without a Turkey Trot? This was the sixth year of me running a turkey trot on Thanksgiving, pretty much ever since Mike & I started spending Thanksgivings together! (We began dating in 2006).

So this year was similar, and when we began planning the SF trip, I started looking for a San Francisco Turkey Trot.  Interestingly, this was the only one we found in San Francisco proper, and seems like it has an interesting history. 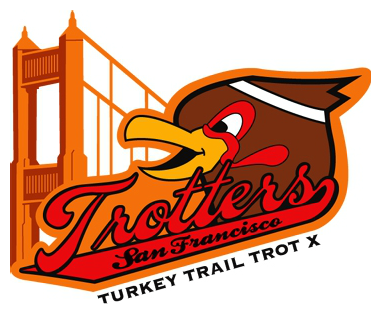 So we signed up!  Mike, my little sister Jaimie & I signed up for the 8K run, and my parents signed up for the 5K walk.  My sister Kate wasn’t sure if she’d be able to join us until after the race sold out, so she was our official gear check & cheerleader.

1. No timing chip.  When you finish, there is someone ticking off on a timer, and you line up in the order of finish to hand in the bit on your bib (that they string together) to document the sequence of finish.  I found that the “official” time that they posted for me later was pretty close to my Garmin time, so it seems like this worked. But you did have to stand in line for about 5 minutes immediately after crossing the finish in order to turn in your bib tag.

2. Mostly on grass/non paved surfaces.  This is where Mike’s xc spikes came in handy to grip the ground, where I was sliding slightly.  But there was at least a half mile on sidewalk & road, and Mike reported that it was not fun to run with the spikes on hard surfaces. In hindsight, he would have gone the sneakers route. 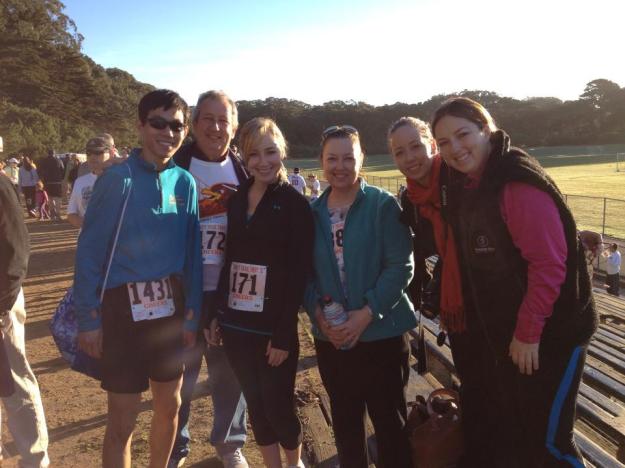 The whole family out for a turkey trot!

I woke up on Thanksgiving with the starts of a cold, so it was pretty hard for me. I actually had to walk at various points to catch my breath as the congestion took hold.  I finished in a time of 49:42, or a pace of 9:57, which was not too bad given the course, my condition & that I’d barely run since my last trip to San Francisco for the NWM Half a month earlier.

We stuck around to see if Mike won any awards (he finished 12th overall, just past Olympian Shannon Rowbury), and they were giving out turkeys, wine & pie for the awards!  Unfortunately the way they calculated the age group awards (including overall winners) meant Mike didn’t win anything, but my Dad won one of the raffle prizes — a bottle of 2 Buck Chuck! 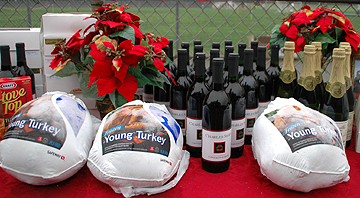 I’d definitely do this Turkey Trot again if I was out in San Francisco city for turkey day in future years.  Since my sister & her hubby live in the South Bay, who knows if we’ll be in the city or closer to them for future celebrations!

2 thoughts on “A little late, but everyone likes some turkey leftovers”